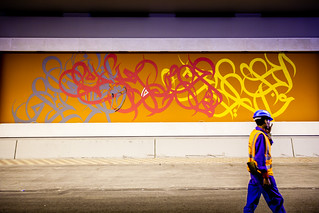 I read an article that talks about how one artist is using arabic calligraphy and street painting to make his mark.

The beauty of the arabic script is boldly stated by bright spray paint as it flows across the wall and makes an equally bold public art statement capturing the eyes of passers by.

Arabic script is gorgeous: bold swirls and delicate loops and fat, juicy dots that look ready to burst. Could be an ad for toothpaste, but to my eye it’s art. The only upside to being Arabic-illiterate is that I see script as pure graphics. Arabic-speaking friends think I’m nuts. I clip newsprint and make collages. My daughter rolls her eyes, then joins me with scissors and glue. I think everyone can appreciate the beauty of Arabic calligraphy. Enter my soulmate, eL Seed.

Born in France to Tunisian parents, his work is a quest for identity. He dabbled in graffiti as a hobbyist, but didn’t take the art form seriously until twelve years ago. eL Seed’s style developed in tandem with a re-immersion into his family’s roots and language. Although street art can be controversial, he chose the form because of its public view; it’s immediate and accessible. It doesn’t require climate control, special lighting, or security guards. And it pulls people in who might not normally enter a museum.

Credits: Arabic Calligraphy – eL Seed’s Writing Is On the Wall

Beauty lies in the eyes of the beholder, and what better than Arabic calligraphy to grace public walls, and Islamic calligraphy art to grace ones home?