Kufi or Kufic Script – The Beauty of Fatimid Islamic Calligraphy 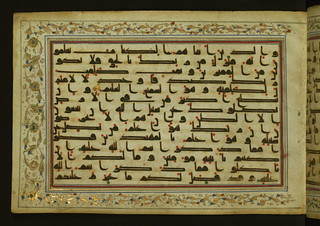 Arabic Calligraphy is more that just a written script. According to a recent post in Muslim Matters, it was used as a tool for communication, like most languages but later eveolved to be used in “architecture, decoration and coin design.”

Not surprising, because the arabic script including the beauty of Islamic calligrapy is spellbounding to the eye.

A part that I'd like to focus on in this article is the history of the Kufic Script.

If we examine Kufic script inscriptions, we'll notice particular characteristics, such as the angular shapes and long vertical lines. The script letters used to be wider, which made writing long content more difficult. These characteristics affected the usability of the script and made it more suitable for architectural and written Islamic titles, instead of long texts. The script was used for the architectural decoration of buildings, such as mosques, palaces and schools.

Below are some examples of Kufic scripts and their different developmental stages:

While Kufic has been used for a long time and is one of the more common scripts across the Islamic civilization, some versions of it were developed in particular areas, such as Egypt and Iraq. Understanding how the script developed in different areas and being able to identify each variation of it will help us identify the origins of the artifacts where they appear. Variations and developments of the Kufic script include the following:

The Fatimid Kufic script appears in the architecture of Bab Al Nasr, a gate built by Badr Al-Jamali, a minister of Fatimid Caliphate (909 – 1171 CE), on the northern wall of Fatimid Cairo (Image source: Md iet)

The Fatimid Kufic script appears here on the Sultan Hasan mosque in the Fatimid Cairo. (Image source:Stars in Symmetry)